In December 2014, Gerdau (currently CMC Steel) awarded Russula the contract to supply a contact cooling water treatment plant for its 800,000 tpy capacity rebar mill, in Sayreville, NJ, USA. Twenty months later the new water plant has been designed, built and is ready for operation. With a capacity to treat 4000 GPM (908 m3/hr) of water coming from the reheat furnace and rolling mill, the new process water treatment plant underwent start-up testing in September, 2016.

The new plant was built on the site of the previous one, which is now obsolete. The design reutilized the existing scale pit. Revamping existing structures lowered the project investment costs. Proven technical solutions were used to ensure the water treatment plant was easy to operate and maintain.

Mechanical and Electrical Scope of Supply 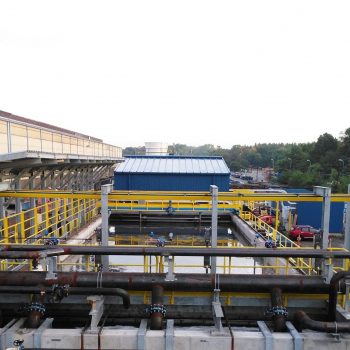 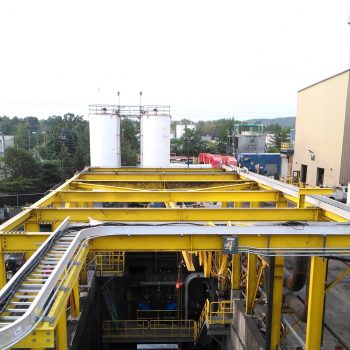 Water from the rolling mill is treated first in the scale pit, followed by the decanting process to remove coarse particles that have a size greater to or equal to 200 microns. The density difference between the water and the scale, causes the larger, heavier scale particles to be deposited on the bottom of the pit, and subsequently extracted by a clamshell bucket.

After passing through the scale pit, the water continues to the decanting process, where by longitudinal drag small scale particles, oils and grease are removed. Coarse particles that gather at the bottom of the decanters will be pumped to the sludge area and oil floating on the surface are taken off by the top of the bridge scraper bridge and removed by the oil skimmer. The decanted water will then pass to the ring filtration system.

In the ring filters, particles that have a higher density than water and have passed through the previous process stages are removed. Finally, the filtered water is pumped through the cooling towers then circulates back to cool the rolling mill equipment.

After completing the civil works and assembly, Russula began testing the revamped water treatment plant last September. Russula completed the revamp of the contact circuits of the rolling mill, in which the investment cost was reduced by modernizing existing ones, such as the scale pit structures. Apart from improving the water quality, the modernization provided greater operating flexibility, reduced maintenance costs and fully automated operations that significantly reduce energy costs and chemical additives.